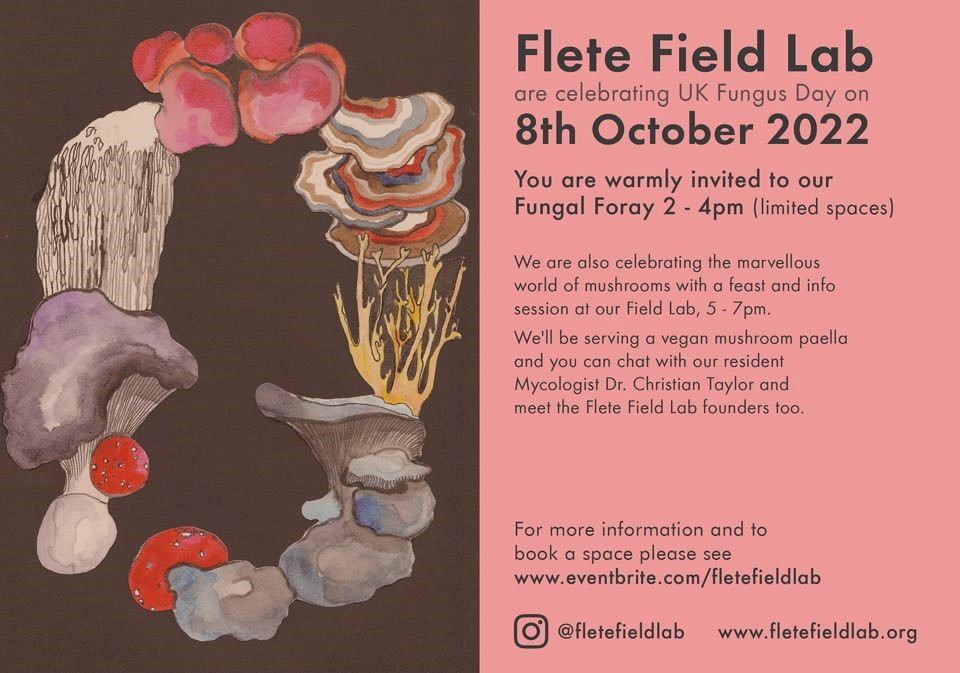 We are celebrating the marvellous world of mushrooms on Saturday 8th October 2002 with two fungi events at our Field Lab and at the Flete Estate. We hope you can join us.

Flete Field Lab are mapping the fungi in woodlands near Holbeton Village on the Flete Estate. Together with Dr. Christian Taylor, you will learn about the fungi in this area and help log any finds along the way. Sadly this is not suitable for those with mobility issues as we will be walking through steep woodland (but if you’re interested in the work and fungi come to our feast later in the day!)

If you wish to join is for our Fungi Feast between 5-7pm, please book separately.

Location: Green Gates beyond Holbeton Village near the Erme Estuary
What 3 Words: https://w3w.co/mural.entire.fortress
Age Restrictions: suitable for ages 8 and up
Cost: Spaces on this event are by donation, please bring a cash donation with you on the day.

Join Flete Field Lab founders and Dr. Christian Taylor (Mycologist) to celebrate the wonders of the world of fungi with a vegan mushroom paella at our field lab from 5-7pm on Monday 8th October.

If you would also like to attend the Fungal Foray earlier in the day, please book separately.

Location: Moorshead Sawmill, PL8 2ES
What 3 Words: https://what3words.com/develop.existence.product
Cost: Spaces on this event by donation. Please bring a cash donation with you on the day. 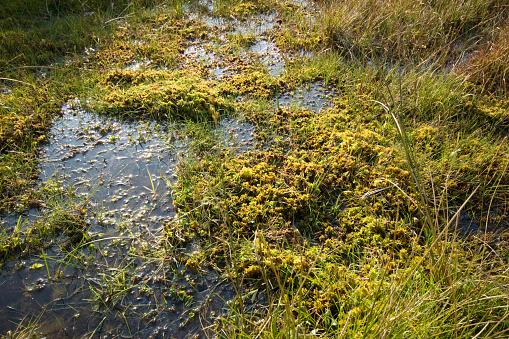 A wetland on Dartmoor containing Sphagnum moss and water flowers . Wetlands are thought of as biological supermarkets as they provide essential habitat for 40% of the world’s biodiversity. Wetlands can reduce air temperatures by up to 10 degrees Celsius and are the most effective carbon sinks on the planet.

Here I could see where the complex intermingling of plants, fungi and insects could inhabit the
steady waters, naturally filtering out nutrients that would clean the water and create a hive of life.
I traced the flow upstream and sat down by the source of the Erme.

I had never communicated with a river before.

Then I heard it.
The trickling drops,
The pulse of the river,
The source,
The heart.
Silly me for not thinking of it before,
The river was alive.
I began to cry.
An internal tidal wave of emotion
Pent up from previous months of research
Released into the moment.
Pollution, drought, entire ecosystems in collapse.
Forgive us,
Forgive me,
I didn’t know. 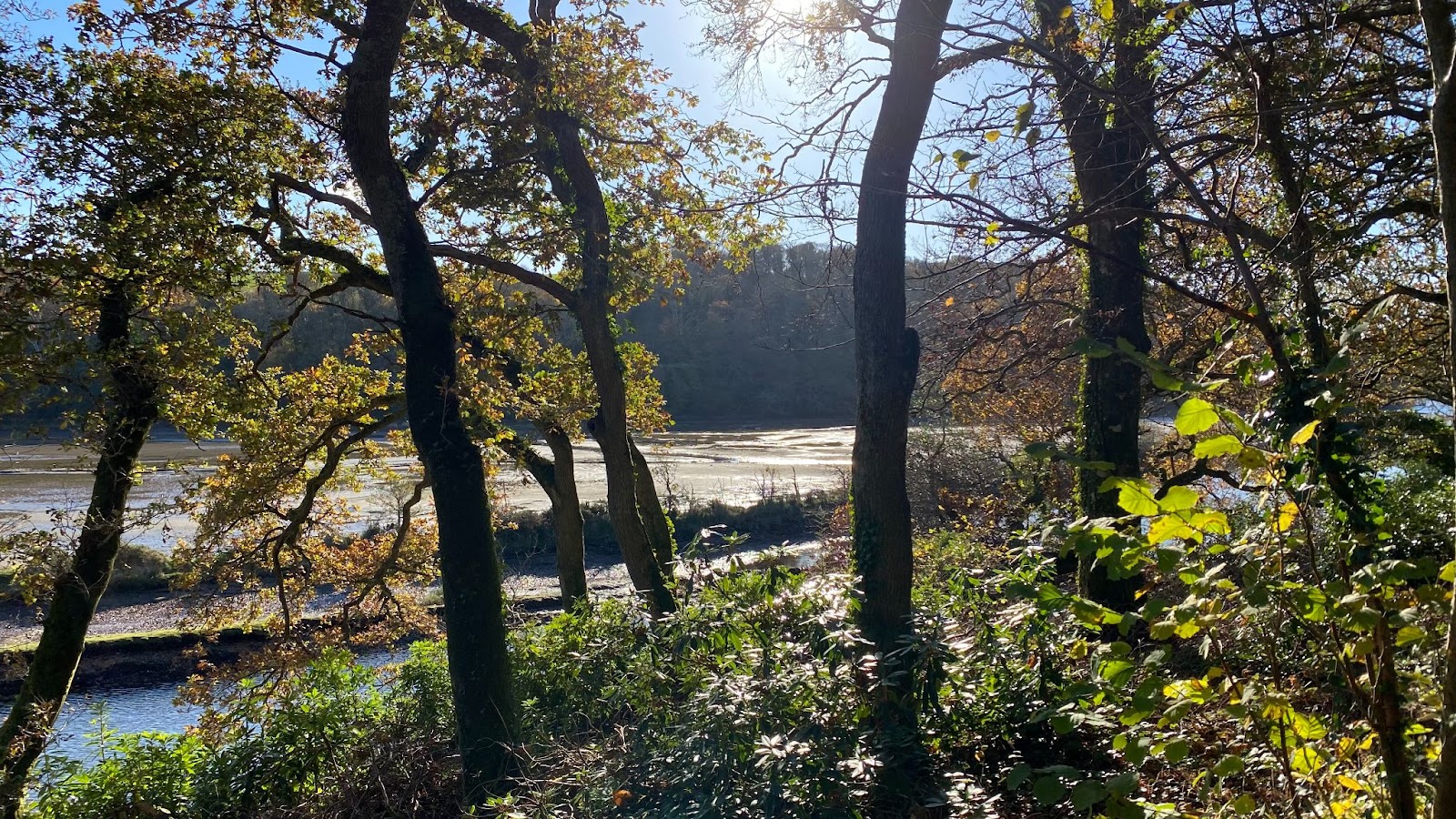 The Erme through the Flete Estate.

“Water is the bloodstream of the biosphere. But we are profoundly changing the water cycle. This is now affecting the health of the entire planet.” – Lan Wang-Erlandsson, Stockholm Resilience Centre.

All activity that happens on land is reflected in the quality and quantity of water in our rivers. The
main drivers of river pollution are identified in the State of Our Rivers Report as agricultural pollution (40%), sewage and wastewater (36%) and run-off from towns and cities (18%).

After walking the river I became ill,
More ill than I can ever remember feeling before.
On the fifth day of sickness I was in A&E,
The kind doctor told me I had been poisoned,
E.coli in the river.
For many days I questioned,
Why had the river made me ill?
After the care I paid her.

It made sense for me in bed late last night,
I had asked the river to show me what I needed to see.
The same poisons that run in her body,
Now run in me.

After days of expelling my inner life,
Completely weak, I struggled to walk or talk.
My ability to create and support shot,
My resilience gone.
This is the state she lives in.
She didn’t poison me,
We did.

With so many UK organisations and individuals embittered by a lack of progress at Governmental
and water company level to address issues around sewage discharges and other factors such as
agricultural run off along rivers, there are several Devon-based projects trialling a range of nature
based solutions. My research explores a range of responses including floodplain restoration, beaver
reintroduction, flood based farming and the role of fungi in filtering polluted waterways.

Studies show the annual UK rainfall has seen little change but it is the distribution of seasonal rainfall that is changing. Wetter winters and drier summers ask us to work out ways to keep fresh water on the land, not only to prevent flooding in winter, but to stop freshwater supplies running dry in summer. According to the Met Office, July 2022 was the driest month on record since 1911, with only 24% of the amount of rain that would be expected in an average July. As river levels run ever lower in dry periods, the concentration of pollution in the water intensifies and nutrient enrichment leads to algae blooms that suffocate life in the water. With biodiversity loss tipping over our planetary survival we must be very worried not only for our own health but that of all other life. 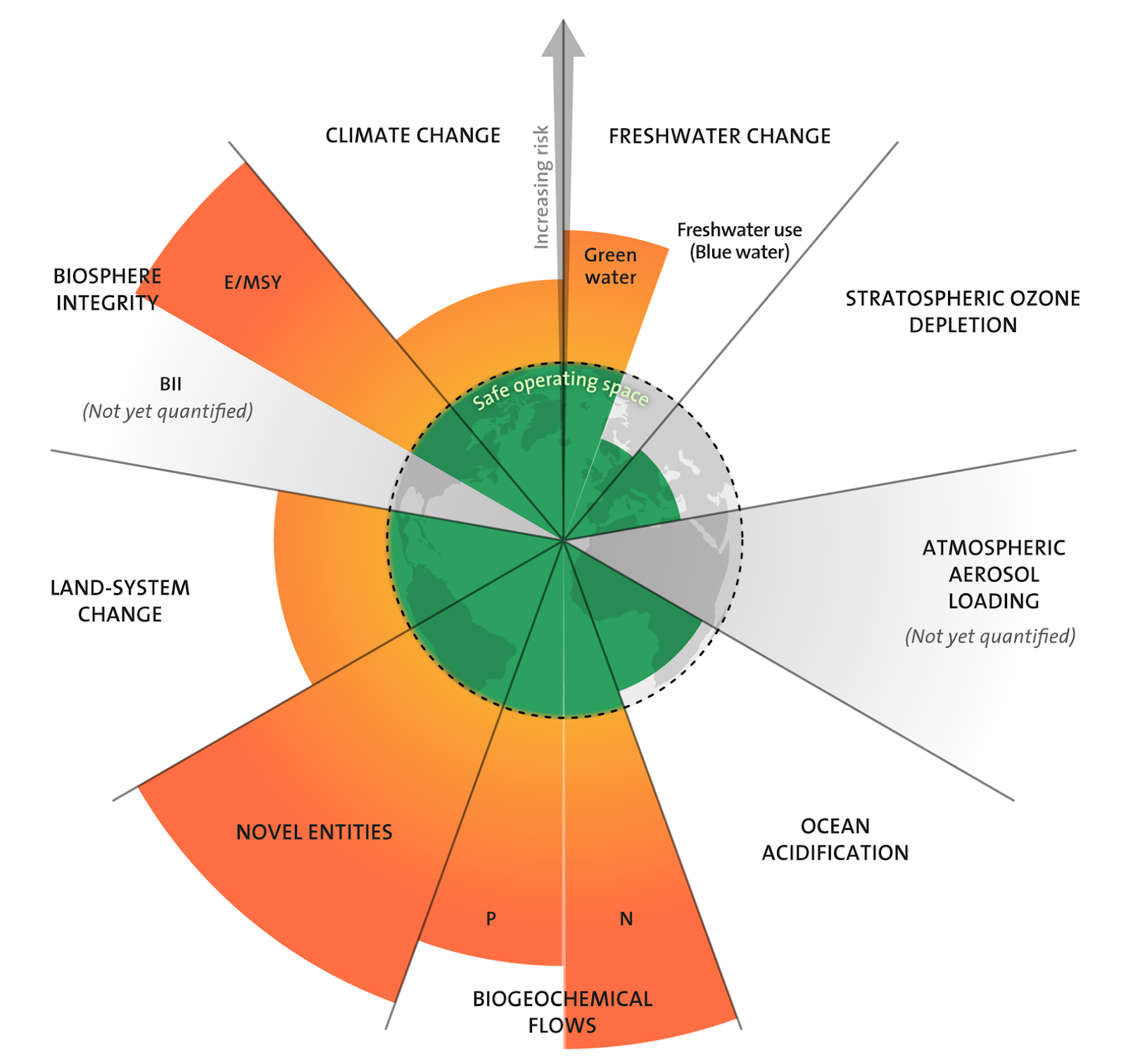 The planetary boundaries framework, published in 2009, demarcates a safe operating space for humanity. Water is one of the nine regulators of the state of the Earth system, and is now the sixth boundary that scientists have assessed as being transgressed. Researchers argue that previous assessments did not sufficiently capture the role of green water – particularly soil moisture for use by plants and trees.

In a lecture I attended with Sir James Bevan, CEO of the Environment Agency, he called the UK’s
water situation ‘a looming existential threat’ while referring to a graph showing an increasing
demand for fresh water is set to outweigh the supply in the next 20-25 years due to population and industrial growth.

When the rain does come it is coming in greater quantities, running straight over poorly managed
soils or overwhelming storm drains and waste water treatment plants, causing the water to rush into waterways while carrying top soils, chemicals and excess nutrients. Pollutants wash out to sea where the UK is consistently ranked as one of the worst European countries for coastal water quality. The UK has lost 95% of our historic native oysters since the mid 1800s and an 83% decline in global freshwater species populations since 1970.

In contrast to this summer’s drought and only a few months before, storms in February 2022 were
causing record breaking flooding, particularly along the Rivers Ouse, Severn, Mersey and Derwent.
This introduces one of the main issues we need to solve, how to hold water in the land to balance
the high flow rates in winter and low flow rates in summer, while improving water quality and
biodiversity?

Nature based solutions involve interventions that mimic the river’s natural behaviours and can be
delivered as long term, biodiversity rich solutions with little need for expensive human technologies, instead the associated costs are in the design and use of local ecological knowledge. I see these solutions in opposition to hard engineering approaches such as dredging or concrete embankments, which involve expensive corporate contracts that deliver solutions with a short term, human orientated fix, while often destructive for wildlife habitats and offer little to community cohesion.

Nature based solutions offer a much wider range of ecosystem services, a term used to encompass the tangible and intangible benefits that humans obtain from ecosystems. Example ecosystem services include products such as food and water, regulation of floods, soil erosion and disease outbreaks, and non-material benefits such as recreational and spiritual benefits in natural areas.

The concept of low-tech innovations is that they are unsophisticated and accessible in price,
materials and application. When low-tech is matched with traditional ecological knowledge (TEK),
the concept of contemporary technology is expanded and has created an emergent movement
known as Lo-TEK. Lo-TEK rewrites the narrative around indigenous, primitive technologies to adapt to environmental challenges. Lo-TEK solutions embrace local, inexpensive, hand-made, easily constructed, soft, symbiotic systems that intelligently harness the understanding of ecosystems. LoTEK innovates in a way to amplify mutually beneficial interactions between multiple species and seeks to advance Darwin’s theory of ‘survival of the fittest’ to ‘survival of the most symbiotic’. Lo-TEK innovation in the ecological crisis creates technologies which are easily scalable and inherently nature positive by design. 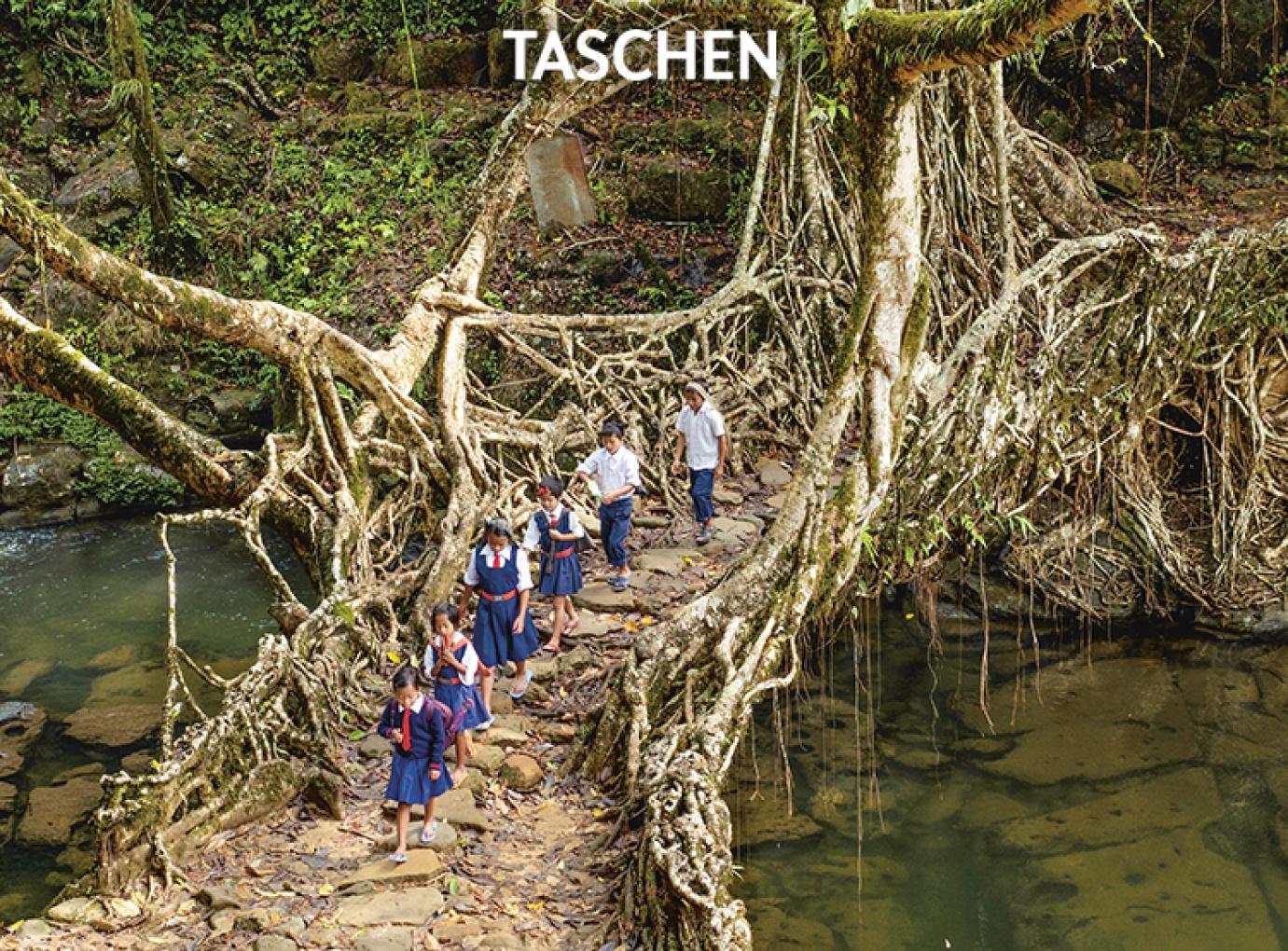 A stunning example of Lo-TEK design.

1. National Trust’s Floodplain Restoration on the River Aller, Exmoor
The process of restoring a river to its wider floodplains has recently become known as a
‘stage zero restoration’ approach and is being pioneered by The National Trust’s Riverlands
programme on the Holnicote Estate. The evidenced benefits are remarkable; improvements
in water storage and water quality, recharging groundwater aquifers, the moderation of
extreme high and low flows, reduction in soil loss and sediment build up downstream,
reduction in eutrophication issues, restoration of wetlands and wildlife habitat, increased
fish populations etc. This process based approach is achieved by raising the channel bed,
regrading valley floors and the pioneer planting of trees and native vegetation across the
floodplain to dissipate the flow.

2. Beaver Reintroduction, River Otter
Could beavers be our answer to the huge amounts of wetland restoration needed across the
country? Beaver dams slow the flow of water, causing silt to deposit in ponds where
contaminants such as heavy metals and pollutants will settle. Over time plants and trees
establish themselves in the dam, which is now rich in organic matter, and help to filter the
excess nutrients from water. A study found beaver habitat could cool the air temperature
down by 5 degrees Celsius and the stream water by more than 2.3 degrees Celsius during
summer by forcing it to mix down with chillier ground water. These cooler air and water
temperatures can help combat water loss through evaporation and the overall impacts of
climate change.

3. Flete Field Lab, River Erme
The Flete Field Lab has introduced sacks of fungi to a polluted waterway beneath a waste
treatment plant in Holberton. Mycofiltration describes the process of using habitats infused
with mycelium as a biological filter to clean water of pollutants rich in organic matter. As the
mycelium recycles the nutrients of contaminated waters, the fungus grows and the water is
cleansed of harmful bacteria like e.coli , heavy metals, nitrates and phosphates. Further to
filtration benefits is the creation of a food source. When the mycelium fruit mushrooms that
release spores, a biological oasis emerges around the food source including insects, fish,
birds and mammals. Successful results by the Flete Field Lab evidenced a reduction in
suspended solids by 40%, chromium by 90%, cadmium by 40%, e.coli by 27% and nitrates by
10%. 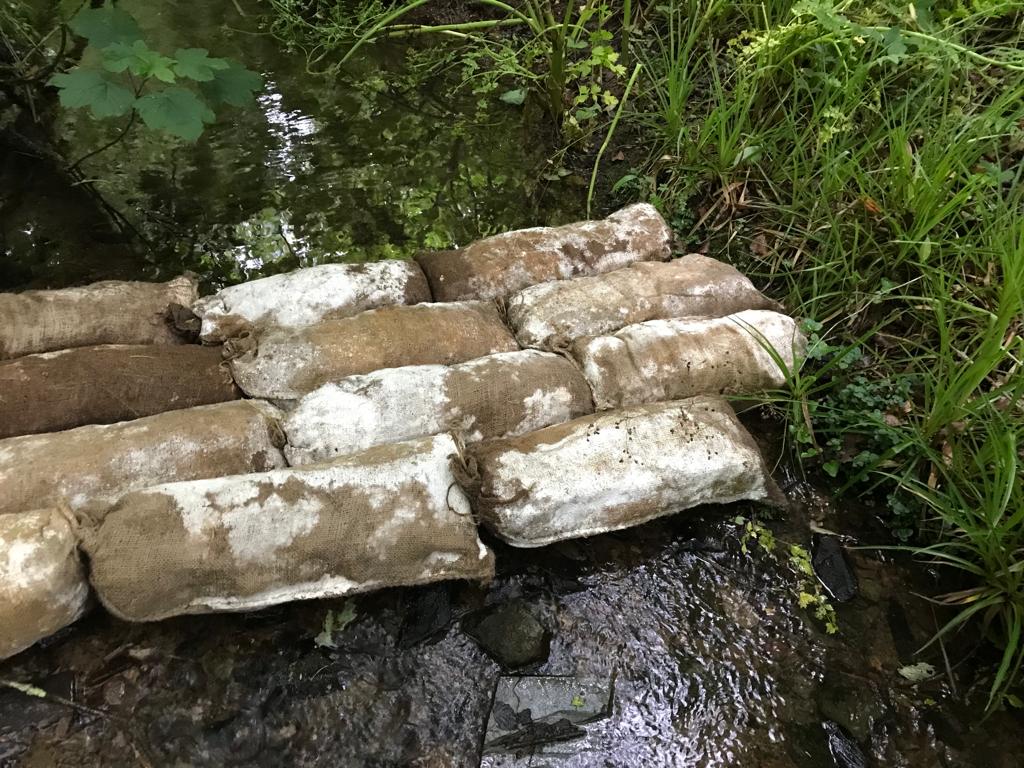 4. Flood Based Farming, the Great Fen
Water Works is a pioneering three-year project embracing seasonal flooding into the farming
system. These practices can support crop production, livestock and agriculture, under conditions
that maintain or even improve the ecosystem. Flood based farming contributes to food security and delivers many other ecosystem services including increased soil fertility, the restoration of flood retention capacities supporting aquifer recharge, drought resilience and biodiversity restoration.